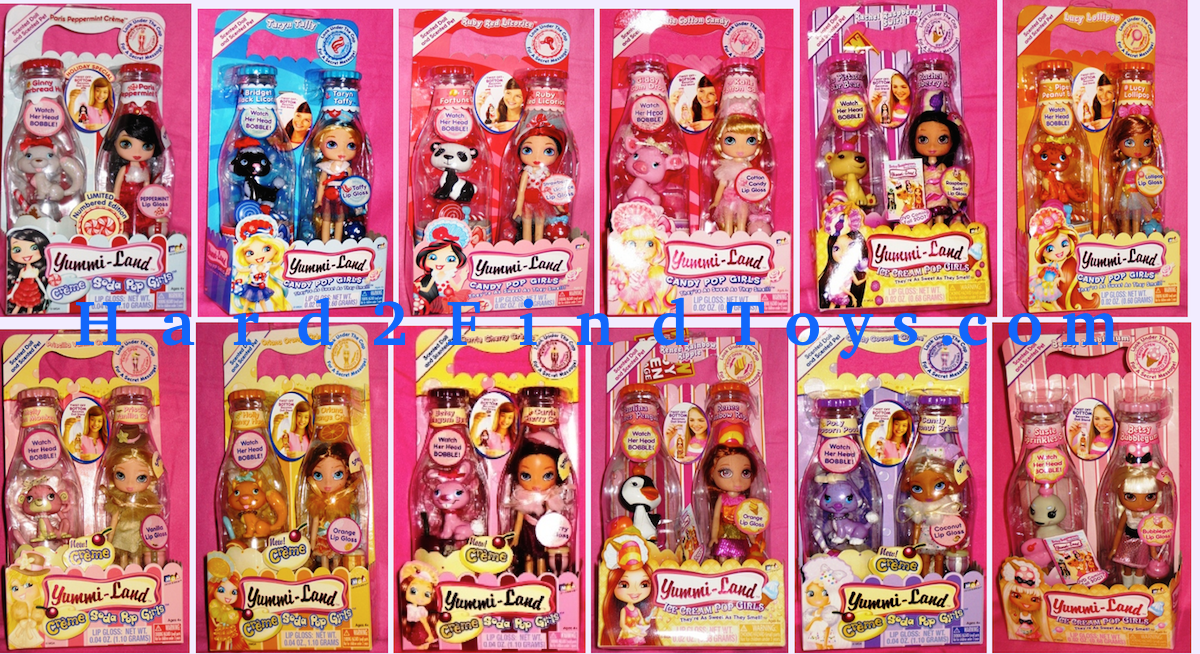 Yummi-Land dolls are as sweet as they smell:}

The company MGA Entertainment put Yummi-Land dolls along with their pets on the market back in 2006; and placed each doll in a group with delicious sounding names like Soda Pop Girls, Ice Cream Pop Girls, and Candy Pop Girls. The dolls and their pets have yummy sounding names as well; and why wouldn't they? They are, after all, Yummi-Land dolls and animals. Yummy sounding doll names include Katie Cotton Candy, Lucy Lollipop, Cara Caramel, and Candy Coconut Creme. Goody pet names include Sadie S'More, Betsy Bubblegum, Ginny Gingerbread, and Piper Peanut Butter.

Yummi-Land dolls come inside twist open soda bottles that, once opened, may be used as banks. Both the large and the small dolls come in twist open bottles; however, the smaller bottles may not contain coin slits in the caps. A useful feature the bottles have in common is that their bases become doll stands.

Although the smaller bottle caps may not have coin slits, collectors can still use the bottles for saving money if they choose to do so. They can simply drop coins into the bottles once opened. This is no big deal since it is necessary to twist open the bottles in order to remove the dolls anyway. Also, the bottle caps come with secret messages that are best read when the bottles are opened.

Some favorite Yummi-Land features are the bobble head pets, the awesome fancy fashion clothes the dolls wear, and accessories that match each doll's yumminess theme, For instance some hairbrush backs are designed to look like ice cream or candy balls and their purses may depict candy shapes or ice cream decos as well.

Yummi-Land dolls, especially the large ones, are becoming more difficult to find because they are no longer produced. Dolls shown on this page may be found at ToyFanatik.com and PurpleToyShop.com while supplies last.

Now for the dolls...


First up is the Natty Nutty Sundae who is not only a scented fashion doll but the birthday version as well. Natty is from the Sundae Pop series. She is from 2009 and comes with a birthday tag for a special girl who loves sweet surprises! Natty also comes with an ice cream sundae purse, lip gloss, and a head band. She is decked out in blue and peachy outfit including blue and red striped leggings. On her feet she sports a pair of short length orange boots with blue bows. Natty's pet, Macy Maple Cream, wears a flowered hat.

As demonstrated by the confetti on her colorful blue box, Natty Nutty Sundae is ready to party. These Sundae Pop dolls make wonderful gifts for birthdays girls. In addition to accessories, Natty's box comes equipped with a Happy Birthday tag as shown in the lefthand image. A polka dotted bow seals the deal to make this a special gift. UPC 035051363743.


Rachel Raspberry Swirl is an Ice-Cream Pop Girl who comes with her bobblehead pet Palamo Pistachio. The doll and the pet as well as accessories come inside their own twist open soda pop bottles. The soda bottles open from the bottom so the doll and pet can exit and re-enter their cases with ease. Each bottle is topped with a collector cap that reveals a secret message. As with other Yummi-Lands, the doll and pet have sweet flavored scents. Doll is approximately 5 inches and recommended for ages 4 and over.


Taryn Taffy is from 2008. She comes with a purple brush that bears white stripes, swirls, and red bow. She carries a blue candy ball purse with white polka dots and a red bow; and inside is *taffy flavored lip gloss. Her headband bears patriotic red, white, and blue to match her sailor suit attire. Showing her patriotism with her outfit, Taryn wears red, white, and blue sailor suit inspired clothing that includes a crinoline skirt and a showy red button at the waist. Her shoes are red and blue with ankle straps. Taryn's pet wears a red ribbon bow on her head. UPC 035051346197.


Coconut colored brush with flower and purple and white striped handle; creme soda pop purse with *coconut lip gloss, and white coconut hat with colorful specks and large purple bow. Candy is from 2008, wears a white dress with colorful specks, a boa with a soft yellow ribbon plus purple and white ankle strap shoes. Her pet wears a purple bead like necklace and a soft yellow bow. Recommended age is 4 and over. UPC 035051337652.


Ruby Red Licorice collector doll from 2008 checks in wearing a red and white leotard covered with a red and blue crinoline skirt plus a puffy red ball at the waist. She also wears red and white ankle belted shoes and red streaks through her hair long dark hair. Her pet wears a red ribbon bow.

Ruby comes with a red and white striped brush adorned with a blue bow and carries a purse with white dots and a blue bow. A twisted red and white head band with blue crinoline embellishes her hair and strawberry licorice lip gloss comes in her purse. UPC 035051346210


This Mindy Mint Chocolate Chip doll is approximately 13" tall and comes with her friend Sadie S'More Saint Bernard. The doll as well as the dog have pleasant scents and the bottle that Mindy comes in can be used as a bank once the doll is removed. Girls get to enjoy secret messages when they receive Ice-Cream Pop girls because messages come with these dolls.

Mindy Mint wears a soft blue dress with black polka dots that represent chocolate chips and comes with a matching headband with ice cream cones and a painted on buckled belt.


Cara Caramel is from 2008 and comes with a lollipop brush, a twist-wrapped caramel head band, a candy ball purse, and *caramel lip gloss. Cara is decked out in a blue, purple, and brown outfit with a spunky skirt that keeps it shape due to its crinoline makeup. Cara also wears blue and pink bowed shoes with ankle straps. Her pet wears a pink bow between its ears. UPC 035051350156.


Carrie Cherry Creme comes next with her burgundy and pink outfit. Carrie comes with a cherry shaped brush that has a green fruit stem handle. She also has a striped cherry soda decorated purse, a cherry top her crinoline laced head band, a pink sash around her burgundy dress, and a pink bowed shoulder wrap. Carrie's two toned burgundy and pink shoes have ankle straps, which turn out to be a Yummi-Land design specialty. Stored inside her purse comes delicious *cherry flavored lip gloss. Carrie's pet, Betsy Bubblegum Bunny, wears a pink collar and a pink bow.


Katie Cotton Candy comes with a lollipop brush, a cotton candy head band, a hard candyball purse, and *cotton candy lip gloss. Katie Cotton CandyHer outfit includes a fur like pink and white striped top, and a pink crinoline skirt. Katie also wears pink and white shoes with bows and ankle straps. Her pet wears a bowed white ribbon between its ears. Katie is from 2008. Recommended age is 4 and over. UPC 035051346180.


Lucy Lollipop is one of the Candy Pop Girls from 2008. She comes with a cute little lollipop shaped brush, a twisted wrapped candy head band, and a hardball candy purse with lollipop lip gloss.

As far as her outfit goes, this Oriana doll sports a double tone orange outfit with a gathered skirt that also has layers, sparkles, and a blue ribbon sash. Around Oriana's neck is a soft fluffy orange boa decorated with the same colored ribbon. On her feet, Oriana shows off a pair of blue and orange bowed shoes that, of course, also have the Yummi-Land trademark ankle straps.


Next comes Paris Peppermint Creme and her pet dog Ginny Gingerbread Husky. Paris is a Limited Edition Christmas holiday doll; hence her peppermint candy stick handled brush with a gingerbread figure on the base. She is included with the Creme Soda Pop Girls collection.

Paris wears a beautiful scarlet red outfit with white fur just below the dress collar, white gloves with red ribbon tied bows, and a red and white hat. Ginny the dog sports holiday coloring as well with her large red ribbon atop her head.


The jumbo Renee Rainbow Ripple is about 12 to 13 inches tall. She is still in her box so the seller is unable to make a precise measurement and research has not been helpful since because different reviews encountered did not all describe her with the same height. A yardstick was placed next to the box to make the best estimate possible. Even that tactic was tricky because the doll stands on a "pedestal" inside the box. At any rate, as previously stated, Renee stands approximately one foot or better.


The jumbo size Renee Rainbow Ripple, comes complete in a box that includes the large size version of her pet penguin, Paula Pralines Penguin. Unlike the larger version wherein the penguin comes hovering above a bed of tulips, the smaller version of Renee Rainbow (just below the large doll) shows that both come inside soda bottles. The smaller doll is roughly 5 inches tall.

Remember to click on any doll for more details and to purchase while supplies last.